Paul and Glenda grew up on a farm in Vermont’s remote Northeast Kingdom. They keep close to each other and have a shared sense that their way of life is coming to an end. But only when Paul returns home on his Harley Panhead to help his parents with the farm does the drama really begin. The dream of the open road—wind in the hair, power in the groin—is common among men young and old, but it is fraught with complexity and often danger. Panhead follows Paul on his journey from a hillside farm to college, to work in the Midwest and almost home again. 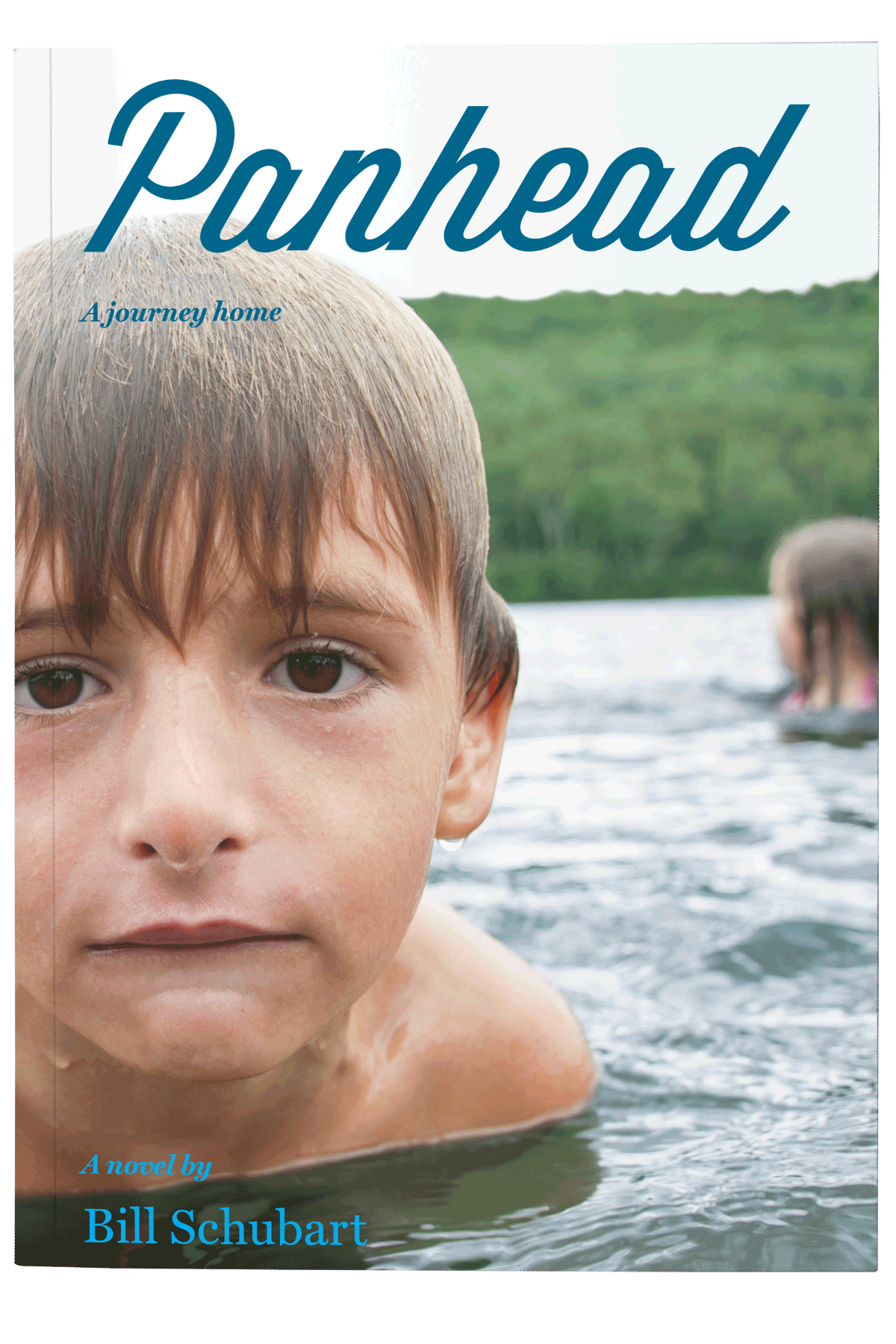 “Panhead, like Schubart’s previous books is suffused with humor, humanity and most of all insight. Schubart has taken his native Vermont and transformed it into a meditation on the human condition.”

- Ernest Hebert, author of I Love U and Never Back Down

An Excerpt From The Book:

Earlier in the afternoon, he pulled off the road to share a few Ballantines with two codgers sitting along the road in a dirt pull-off. The 4 X 8 sheet of whitewashed plywood leaning against a birch tree caught his attention far down the road. In front of the large sign is a collapsed lounge chair. Painted on the sign behind it is a bright blue arrow pointing down at the chair with hand-lettering saying, “You, Having a Beer!”

Flanking the chair, two men sit laughing and talking in salvaged armchairs, holding beers by the neck. A bench seat from some bygone pickup truck leans against another birch tree and a blue cooler sits between the empty chair and the older man.

Paul downshifts and brakes to a stop several yards beyond the pull-off, makes a U-turn across both lanes, and idles up to the roadside oasis. The two fellows immediately hail him and point to the throne beneath the blue arrow. One opens the cooler, fishes out a glistening wet, long-necked bottle, pops the top with a can opener tied to the cooler’s handle and hands it to Paul as he kills the 74- cubic inch engine.

“Ride like that’ll dry a man out. Have a seat and a brew.”

“Public service of Leicester Gore … our welcome wagon for visitors. Have a seat. Where ya from? Where ya headed?”

Paul takes a long swig and drops into the comfort of the collapsed chair, a welcome change from the narrow seat bolted onto the panhead’s hardtail frame. “Driving back home from Ohio, used to live up in Westmore, got another ninety miles to go before it gets too dark. Lights and wiring on this hog’s a bit iffy. You guys out here all summer?”

The three chat for about twenty minutes, the older pair asking Paul about his travels, especially his time working construction in the Midwest and his year of college. Passing drivers wave or do a double-take. A rusting Dodge pickup slows and pulls in.

“Someone else’s turn for your kindness,” says Paul, rising from the chair and remounting his bike. “Sure I can’t pay you something?”

“Our social security at work … pleasure meetin’ ya. Drive safe and mind the sheriff in the next town. He’s a peckerhead and a teetotaler … dangerous combination.”

Paul kicks the panhead to life on the first try and roars off onto the highway, waving back to his hosts.

He can feel the temperature fluctuate as he moves in and out of the occasional incisions of sun setting above the Winhall Range in the west. The chopper’s hard-tail transmits every pothole and cold patch to his spine as he slaloms broadly through the road’s own rugged landscape.

When the road and the river wind briefly together he can smell the water and feel the airborne moisture imparted by its cascades. Passing a hayfield with its last cutting waiting in neatly tedded rows for the baler, the smell of new-mown hay inundates him with images of home. He has another two hours to Westmore and he worries about the panhead’s ad hoc wiring and the intermittent blinks from the headlight’s bulb. He wants to sleep in his own bed.

In the chill shadow of the mountain, he passes through a shambles of a farm. The barn and house are on opposite sides of the road. In the century before, when the farm was new, the dirt track’s warp between the house and barn had been a boon, but as the occasional horse and wagon gave way to a continuum of cars and trucks, the weft of family and farm animals across the heavily traveled thoroughfare makes farming here difficult and dangerous.

The roofline of the barn mimics the swayback of the ancient Belgian munching downed apples in a corner of the shaded field. Jersey heifers stare at him dolefully as he roars by. Rusted farm equipment litters the field adjacent to a collapsed lean-to with an iron-wheeled red tractor and rotted out manure spreader still inside waiting to be rescued. The air is redolent with the rich smell of old manure and his mind again races home, and he wonders what he will see there when he gets there.