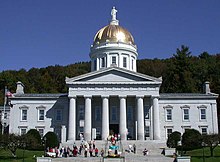 Two weeks ago I wrote about extending gubernatorial and legislative terms from two-year to four-year terms. Since then, good friend and revered former State Archivist Gregory Sanford sent me a history of efforts to amend the Vermont Constitution that addressed the number of times such an effort has been tried and failed.

The nature of the positions was deemed relevant to compensation philosophy. By way of example:

Although the Governor’s salary was considerably less back then, our present governor makes $184,000 a year. I would suggest that this is adequate and I believe most Vermonters would agree. But as I said in my last column, business leaders outside of public service would find the CEO job of running an $8B enterprise with that salary ludicrous, especially with a two-year employment agreement.

As noted in the Snelling Center study group, judicial positions required little consideration as they were generally deemed well-compensated and attractive to available talent.

So legislative compensation consumed the lion’s share of our consideration.

The position of legislator has changed considerably over time. Until the 1960s, our large farming community was a source of many local lawmakers and the legislative calendar reflected the seasonality of Vermont’s agricultural community  ̶  as it still does  ̶  that allowed farmers to serve in Montpelier. But since that time, agriculture has waned and the number of Vermont dairy farms shrank from a high of some 8000 when I was young to some 650 today.

Farming and farm technology have also changed radically in the intervening years, diminishing the traditional seasonality. Also, like so much in Vermont, agriculture can be divided into what we might call “chosen enterprise” and “survival enterprise.” There are now some 6800 farm operations in Vermont, reflecting the expanding diversity of crops and animal-based production. As such, seasonality is considerably less relevant to legislative service.

If the legislature meets for five to six months, total compensation, less expenses, would be between $16,100 and $19,318 for the session. This is about average for other State legislatures around the country using a part-time model. This extrapolates to $38,600 a year but the extrapolation is meaningless if full-time employment for half a year precludes any employment for the other half of the year.

One of the major challenges our group saw was that states like Vermont in which legislators must determine their own salaries have what is called a “pay problem.” Public perception of legislators voting themselves a raise can be negative and may even be used against them during reelection campaigns. As such, considerable focus went into addressing this problem.

It was agreed that legislative compensation could best be driven by two elements. One was automating the problem or creating an algorithm that determined compensation, taking it out of the hands of the legislature.

The second was basing that algorithm on the fiscal wellbeing of the governed. As such, our group felt that median Vermont household income would be the right driver for such an algorithm.

For example, in 2020, Median household income in Vermont was $63,500. If the legislature serves six months that would peg their income at $31,750 for six months service, roughly double what it is now. The number would be tied mathematically to the number of days the legislature was in session.

Doubling the compensation for legislators may be a significant cost, but the downside may ultimately be costing more.

Few Vermonters can afford legislative public service. The current compensation is wildly out of line with the judiciary and executive branches. Over time, the effect is that our “citizen legislature” becomes a “privilege” legislature in which only those who can afford to serve run for office. And, if the majority of legislators are “privileged,” then the very nature of lawmaking changes.

A recent discussion with a friend and public servant was a case in point. Although I support decriminalization, I was complaining about the time and energy the legislature put into developing marijuana as a business enterprise. Having lived in Vermont since 1947, I observed that I didn’t know anyone who wanted marijuana who didn’t have it, but that I knew many who couldn’t afford a home, college, or access to healthcare or nutrition… hardly the problems of privilege.

The other matter we discussed had to do with the support and policy research that a legislature made up of citizens needs and deserves in order to be effective.

In the Snelling administration, Vermont had a strategic-planning council that was available to all branches of government for research and information regarding proposed policy creation. A subsequent administration did away with it to “save money.”

As I’ve said before, the nature of legislative work today differs considerably from what it did decades ago when issues were fairly clear-cut and comprehensible.

Today’s “complex systems” demand the capacity to research, integrate data, and survey and assess how others have met some of our most difficult challenges. The “summer study committee” doesn’t cut it any longer. We need a team of dedicated researchers, policy professionals, and cutting-edge thinkers to be available to support the difficult work of producing cost-efficient policy embedded in law.

The paltry sums we save in our “affordability agenda” by paying legislators less than they can live on and by adding to their substantial burden the need to do their own policy research is a pinch-penny plan that minimizes the utility of Vermont’s dedicated public servants.

We need a legislature that is made up of elected Vermonters from all walks of life as expressed in the full range of diversities, racial, gender, geographic, and economic. Only then will we be able to create intelligent, strategic law that makes us a better state.