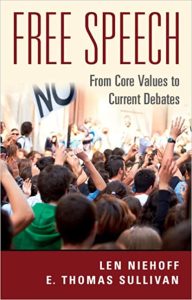 Apart from being a well-researched and comprehensible treatise on the history of the First Amendment, it creates a rational architecture for how to think about the tensions inherent in our understanding of free speech, what we want to believe and what we ought to consider.

I’m hardly a constitutional scholar but am finding the book both enlightening and evocative of my own thoughts about other federal issues similar to free speech  ̶  in my view, a characteristic of the very best books.

What other fundamental constitutional issues span the spectrum from absolute to relative?

Our government’s capacity to:

Looked at from today’s perspective, one of the more interesting questions is how accelerating advances in technology, communication networks, and scale have affected each of these issues. How do the reach and amplification technologies of the Internet, social media, and terrestrial networks impact the positive and negative aspects of free speech?

Does this amplification capacity, so often used without restriction, recourse or retribution, cause us to reconsider the absolutist approach to free speech?

Does the freedom to lob verbal grenades and misinformation from anywhere alter the free-speech regulatory equation?

Times have changed from the days of the Speaker’s Corner in Hyde Park, London, the oldest continuous free-speech platform in the world, where a succession of orators takes turns expressing their views in public. Today, 80+% of the world’s population, some 6.5B people, own a smartphone, and every cellphone is now a speaker’s corner.

In the finest scholarly works, the author(s) don’t presume to answer all questions but rather try to provide us with context and information that raise new ones. “Free Speech” does this brilliantly.

As the authors point out, our understanding of the First Amendment has evolved substantially since its inception, when it was viewed pretty much as enshrining an ancient element of English Common Law, the right to assemble and speak.

Around World War I, the government was given wide legal powers to limit speech as a way to ensure a successful war effort. This latitude was limited somewhat in the intervening years but the government continued to restrict speech through World War II, again to secure the war effort and exert control over propaganda.

The demonization of Japanese and Germans and their culture, many of whom were American citizens like my own German grandparents, who refused to speak their native language for fear of retribution, was overlooked.

Then after World War II came the McCarthy period and the second “Red Scare,” in which people were casually branded as “communists, often ending their careers. These periods remain enduring embarrassments to the nation today.

In the early ‘60s, the emergence of an alternative culture  ̶  “hippies,” Freedom Riders, women’s-rights activists, and anti-war protesters  ̶  led to a spate of definitive court decisions limiting and defining government’s capacity to limit public discourse and assembly. The authors signal N.Y. Times vs. Sullivan as a major point of demarcation in the march towards a more liberal understanding of the First Amendment.

“The post-1963 era ushered in a time of substantial political unrest: protests over civil rights, women’s rights, the war in Vietnam, and other controversies raised challenging questions about how much protection the First Amendment extends to free speech that is harshly critical of the government, public officials, and the status quo. Beginning with this period the Court granted significantly more constitutional shelter to such speech than it had previously enjoyed. The 1960s and 1970s were the age of dissent. The Supreme Court made clear that dissident voices do not fall outside of the First Amendment’s scope.”

At night, when I finally set “Free Speech” down and take time to digest all I’ve learned, my mind inevitably evokes the range of similar issues to which I alluded earlier.

For example, limiting gun ownership is another issue affected by technology and scale. Apart from a general misunderstanding of the Second Amendment itself and lack of knowledge of the 2008 Heller Amendment, the issue divides absolutists, who tolerate no limitation on gun ownership, from relativists who believe gun ownership should have some limits based on a rational policy that protects our society from the mounting death toll we’re living through.

The blunderbusses and cannon of the Founding Fathers pale in killing capacity to today’s modified weapons and covert 3D printed plastic revolvers that elude scanning devices. Death by gun violence in America is eight times higher than in Canada which has some gun-control measures in place. This divisive issue is playing out in America as we speak.

Or, even as we’ve engaged in what I would deem morally questionable wars historically, from Korea to Vietnam, Grenada, Iraq and Afghanistan, the question of who can declare war and under what circumstances, although constitutionally if not morally resolved, still begs the question, “On what criteria is such a decision based  ̶  something like the debunked “domino theory?”

Likewise, the ability of the U.S. Government to execute and incarcerate its citizens has evolved through many legal phases. Most states have eliminated the death penalty, but it is still a staple of U.S. federal punishment and, from a racial and demographic point of view, remains a hot mess of injustice. Most countries in the world have eliminated execution, though others, of course, use far worse extrajudicial killings to manage internal dissent.

And, in spite of public opinion supporting access to abortion, the recent Supreme Court decision striking down Roe v. Wade called back into legal question the steadily evolving concept of sexual and reproductive freedom as it relates to women’s rights, abortion and family planning. Indications, as expressed by Justice Clarence Thomas, are that Court conservatives would also like to take aim at contraception and LGBQT rights.

To my mind, one of the greater ironies today is the Establishment Clause and the Free Exercise Clause which aims to protect citizens’ right to practice their religion as they please, so long as the practice does not run afoul of a “public morals” or a “compelling” governmental interest. As the authors point out, the precise definition of “establishment” is unclear in much Court history and occasionally the two clauses have been known to conflict with one another. Traditionally, the Establishment Clause meant prohibiting state-sponsored churches, such as the Church of England in the U.K..

As such, the groundswell of conservative support for declaring the United States a “Christian nation,” which has played out in countless legal decisions especially around language in the “Pledge of Allegiance” defines irony.

As a child growing up in Morrisville, we did not start school without all standing, hand on heart and saluting the flag while declaring, “One nation under God…,” an innovation that began in 1954 under President Eisenhower. Jehovah’s Witnesses and atheists sought court relief from being required to repeat the pledge.

The very conservatives who have driven so much judicial selection for the last few decades through the Federalist Society appear to want their political goals enacted often in spite of Constitutional core tenets. Today, almost half the country is on record believing that the U.S. should be declared a “Christian Nation.”

Sullivan and Niehoff’s book drew me deep into the issue of free speech. I learned more than I ever thought I could about its meaning and policy ramifications in the increasingly complex world we live in and it led me to explore the orbits of similar issues that affect our lives.

I strongly recommend this work, as it’s very much a work for and of today. It addresses the core issues of hate speech, speech in public schools, academic freedom and Internet speech in an accessible, readable way and is a must-read for all who care about ensuring the future of our democracy.

If we are to prepare and arm ourselves against the looming threats to our democracy, a thorough understanding of its fundamentals is a necessity.