Temptation in the Supreme Court 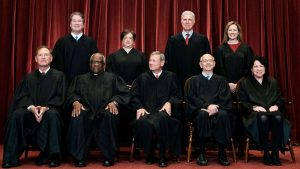 I have a love-hate relationship with religion.

Born of a German-Jewish father and a mother of Dutch background and atheist tradition who married a Morrisville, Vermont Catholic after being widowed in World War II, I was raised from an early age as a Catholic. As an altar server, I was captive to the Baltimore Catechism, which purveyed a highly proscriptive morality, rife with sin, penance, absolution, atonement, damnation, and the promise of salvation.

But I walked away from religion when I was 18 after reading Dostoevsky’s The Legend of the Grand Inquisitor, a tale within The Brothers Karamazov. But religion did not release its grip on me that easily.

Although Christianity and other orthodoxies have always been attractive to men seeking to hijack their power over humankind, the “love” side of my respect for religion lies not only in the small communities of goodness that dot the worldscape and their capacity to help one another but the peace they offer their faithful in quiet, in song, in ritual, and in good works for one another  ̶  spiritual ports in life’s storm.

The origin of Christianity is the emulation of Christ for whom love, forgiveness, freewill, and empathy are all predicates to true Christian practice and works, as expressed in Paul’s letter to the Corinthians (13) which ends, “And now these three remain: faith, hope, and love. But the greatest of these is love.”

Why am I telling you this? Because the religious right’s political engineering that began in the late ‘70s with Phyllis Schlafly, Richard Neuhaus, George Weigel, Paul Weyrich just achieved their greatest victories with the Supreme Court’s reversal of Roe v. Wade, along with their convoluted decisions enhancing gun owners’ rights in a country rife with gun deaths and allowing school prayer.

Reliable polling indicates that while Americans have mixed and nuanced opinions on the complex issues of reproductive freedom, gun rights, and religious practice, a clear majority supports continuing the half-century Constitutional guarantee of reproductive rights for women, reasonable limitations on gun ownership and separation of church and state.

The “hate” in my love-hate relationship with religion comes from the rampant hypocrisy of pseudo-religious orthodoxy that use religion to enhance privilege, power, and profit to engineer a White Christian theocracy in America in direct contravention both of the Constitution it professes to revere and the most basic tenets of Christianity.

Conservatives’ self-serving distortion of Christ’s teachings and those of his disciples and their decision to embrace the Satanic gifts of “mystery (miracle), power, and authority” that Christ rejected in the Temptation in the Desert underlie a thinly veiled attempt to create a “Christian” theocracy here in a country which professes to value “life, liberty and the pursuit of happiness” for all. It also forges a powerful and autocratic, male-dominated pseudo-religious hierarchy to exploit mankind’s latent insecurity and fear of absolute freedom when the true tenets of Christianity are love, empathy, and free will.

Laying the groundwork for today’s anti-democratic events, Christian conservatives in the ‘80s and ‘90s understood full well this intrinsic insecurity and weaponized it. It became the orthodoxy of the likes of Jerry Falwell and Bob Jones Sr. and was soon embraced by First Liberty, The Federalist Society, The Heritage Foundation, and the Becket Fund for Religious Liberty.

The early religious right leaders also soon realized that the power to change America lay not in an elected president or in a representative Congress but in appointed court justices and that, done right, their efforts could generate hundreds of millions of supporters and dollars. All conservative members of SCOTUS now are or were members of the Federalist Society.

Now, owning the Supreme Court and securing additional judgeships in many intermediary courts, these religious conservatives are turning the institutions of democracy, and the Constitution that is supposed to guide the work of the courts, to their purposes. The banner of “religious freedom” is being used against the Constitution’s establishment clause to build a mostly White conservative Christian state orthodoxy, all in the name of their God.

In The Legend of the Grand Inquisitor, Christ returns to the world of man during the 15th Century Spanish Inquisition and is soon arrested by Catholic authorities as a heretic posing as Christ. The Grand Inquisitor visits Christ in his cell before he is to be executed (again) and explains to him that He, as the Son of God, had overestimated mankind’s ability to embrace free will. The Inquisitor explains to Christ why he should have accepted Satan’s powerful gifts because humankind actually fears true freedom.

I have often wondered what would happen if Christ came back to the Supreme Court today and condemned their efforts to establish a White Christian theocracy in lieu of freedom, love, equality, and empathy? How would these “Christians” respond today?

If the Supreme Court is to be the vehicle by which the prevailing forces choose to erode democracy and replace it with a Whit(ish) Christian theocracy, then the recourse citizens have in their elected officials is negligible, especially now when voting rights are also under attack.

It’s past time for a national outcry about the political cancer metastasizing in the Supreme Court as well as in the lower courts in the country.

American democracy has come under grave threat before and will again, but without leadership and a citizen uprising  ̶  starting with high voter turnout  ̶  to confront the threat head on, we will no longer be the “beacon of hope in the world.” Current events have already diminished us in the eyes of many.

Recently, I was asked if I believed in “American exceptionalism,” and I said, sadly, “yes.” “How do you see it?” I was then asked.

I answered, “ seventy countries have enshrined universal health care as a right for their citizens; 185 countries have parental or paid family leave; forty countries outrank the U.S. in supporting paid childcare. THAT is American exceptionalism now.”

If we revere the consistent messages of Christ, Buddha, Brahma, Allah, or Yahweh, let us practice their teachings and emulate their works rather than pay allegiance to the false idols who abuse their spiritual message by using it to acquire power, wealth, and control.

3 Responses to “Temptation in the Supreme Court”

Hi Bill,
Karl said that you and he have chatted today. He appreciated the opportunity and your time.

As you can imagine, I have thoughts about your reading of what’s happened, but that deserves a time together. A meal
together is overdue!

I think we agree more than disagree, except on some crucial points.

Crucial points:
Religion, the group expressions of values is not the same as true Christianity.

Arguments about interpreting the Constitution are real and legitimate. Stretching its meaning and intent to accommodate modern life by the courts is not OK. Amendments are the route for that, painful and difficult as the process may be.

Congress has failed it’s Constitutional authority and responsibility to enact policy and appropriately authorize the Executive to implement them. (I have read the EPA decision. SCOTUS did the right thing).

SCOTUS has not prohibited abortion. Congress has the power to act if consensus can be achieved.

The ‘Conservative strategy’ after the social turmoil of the ’60s to work on the judicial system was no secret and, for the moment, has yielded important results, perhaps success, but certainly not a White Christian takeover or a destruction of Democracy.

Instead, It could easily be argued that ultra Liberals are destroying Democracy by creating a Socialist state that gives away $ and fostering dependency.

Karl, Donna and I have had vibrant discussions today. You’ve got us all thinking!

Had a nice call from Karl and we had a long discussion.