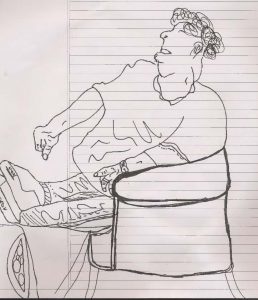 Of greatest significance to me is the question, what do we lose as a culture when we lose the ability to laugh at ourselves?

Criticism of the cartoon seems to boil down to “sexism and racism” to which some Democratic venerables have added “misogynistic, racist and ageist.” I have revisited the cartoon repeatedly and am struggling to see what some others are seeing, even as many defended the cartoon as simple political satire that makes fair fun of a current political event and its principal characters. After all, the meaning we give to what we see is in the eye of the beholder, not in the pen of the cartoonist.

Cathy Resmer, Deputy Publisher of Seven Days wrote a pointed and wise defense of her paper running Newcomb’s cartoon, as well, and noted that critics including prominent Democrats assailed the cartoon on social media.

Others upset by the cartoon have contacted Newcomb’s clients and urged them not to hire him. Is this vigilante effort really about the supposed offender or about self-appointed judges themselves seeking recognition of their righteousness?

To the question of how best to voice criticism, I have in my dotage learned much from my daughter, a tireless worker for social justice and equity. She once quoted to me Professor Loretta Ross, an eminent scholar at Smith, and it’s something I will never forget. Professor Ross asks if we’re better served by “calling-out” someone with whom we disagree or by “calling-in” that person to invite dialogue, understanding, and possible resolution. I believe this should be a guiding principle for civil society and applies here.

So, we must ask about the motives of the crusaders who feel compelled to “call-out” their personal perceptions of the cartoon’s transgressions. Their tone is one of moral superiority which detracts from the goal of shedding light on a real problem.

Is perhaps the person “calling-out” another on some social transgression really hoping to define their moral superiority rather than trying to shed light on a real problem, whereas one “calling-in” that person seeks dialogue and mutual understanding? Was Senator Joseph McCarthy trying to out Communists or establish his patriotic bona fides? Were the Salem witch trials about eliminating witches from society or establishing their Puritan judges as morally superior?

Much of the criticism took place on social media with no human interaction. Is haranguing each other from the catacombs of social media a good, or even effective, way of bringing supposed or real transgressions to the light of day and dialogue?

As we see the growth of this tendency to denounce rather than to explain and elicit conversation, the question of whether we can ever reconcile free speech and the “cancel culture,” as Prof. Ross calls it, looms large.

The adverse reaction to the cartoon seems to ignore or be unaware of the long and respected journalistic tradition of poking graphic and written fun at politicians and people in high places as long as it doesn’t cross the bounds of civility that undergirds a healthy civil society.

The edgy tradition of cartooning and lampooning in print goes back to Honoré Daumier, Goya and further: 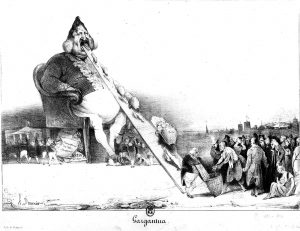 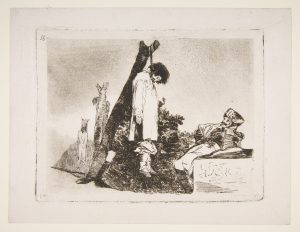 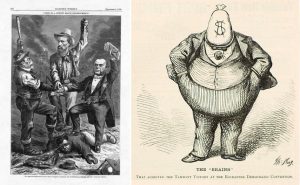 Thomas Nast, the great American cartoonist who lampooned Boss Tweed and Tammany Hall in New York City during the 1870s and ‘80s was one of the best-known practitioners of political cartooning in American history.

While kindness is a virtue, satire has much to teach us. The job of the political cartoonist is not to bring aid and comfort to the rich and powerful, but rather to convey another perspective on their works, a graphic commentary.

When I was young, we traded issues of Mad Magazine, and better-educated kids than I sent home issues of the Harvard Lampoon for us to enjoy. The British had Punch.

Today, we are seeing the chilling impacts not only of our calling-out culture, but also self-appointed critics culling books from school and community libraries, pseudo-educators seeking to control what we teach about our checkered history in our schools  ̶  with the avowed goal of limiting curricula that might induce “any individual to feel discomfort, guilt, anguish, or any other form of psychological distress on account of his or her race or sex.” This dismal trend is misguided. Only when we acknowledge the rights and wrongs of our past can we learn from them and correct them to make a better society for all. Ironically (to me), this is a basic tenet of many religions  ̶  that we admit our sins and then atone for them.

In another recent case, intolerance led to the suspension of Joseph Donarum, the principal at Enosburg Falls High School, for using the school intercom to speak to students about sporting events with Winooski, known for the diversity of its students, where Enosburg students were overheard using racial and gender slurs, raising the question of when occasional questionable judgment  ̶  use of the school intercom system and directly citing offensive language to talk to all the students and staff  ̶  warrants public condemnation, suspension, and possible termination.

Donarum immediately apologized for what he called bad judgment and added, “In my message, I intended to communicate to the entire EFMHS community that I want us all to join together to create a school-wide environment that is safe, tolerant, welcoming, creative, and dynamic for all people. Language that is dehumanizing, hurtful, marginalizing, or alienates anyone will not be tolerated.” It is as yet unclear whether Donarum’s suspension will be permanent.

Even more concerning… The first form of attack in preserving the power of the few over the lives of the many is censorship. We see it more and more in the illiberal countries of Hungary, Egypt, Turkey, and Poland. It’s endemic in long-standing autocracies like Russia, China, Saudi Arabia, and North Korea. Here at home, we can no longer see censorship as a foreign evil. But ironically, it’s coming not from our government but from the powerful, monied interests driving much of the “calling-out” culture across our political spectrum.

By the way, the virulent reaction to Newcomb’s cartoon did not come from the right-wing of Vermont politics.

I’ve spent too much time staring at this cranky cartoon looking for transgressive (racist, ageist, misogynistic) elements. What I see is a typical political cartoon like  hundreds I’ve seen over the years from Jeff Danziger, Ed Koren, Tin Newcomb, Al Salzman and many others.

Let’s retain and cherish our sense of humor and community or we really are doomed as a nation.

2 Responses to “That Newcomb Cartoon”

We must not forget that freedom of speech is the font of most social progress.

It takes communication — real dialogue and debate — to engage people’s minds and hearts on important issues, personal and political.

When words, arguments, thoughts, and even images, are off-limits, we risk the ability to challenge the status quo.

I t is long past time for a woman to represent Vermont in Congress. And I don’t think I’ll find it hard to pick one of these three candidates to support in my party’s primary, nor to support the winner, even if that person is not my first choice.

But that does not mean that I think Tim Newcomb’s cartoon is beyond the boundaries of fair comment.

Let’s encourage robust political debate. If some of it happens to involve humor, that’s to the good. Let us not forget the primary race of the Man with a Plan, Fred Tuttle!

Rich, May thanks. 90% of responses were indeed positive which is encouraging and yes, we are blessed to have such a bright crop opf candidates. Be well. Bill