The Correctional Facility is an illustrated novella updating Dante Alighieri’s 700-year-old classic The Inferno. Our guide however is not Virgil but Walt Whitman and Dante’s flaming pits are succeeded by modern brutalist prison architecture. Many of the sins of Dante’s time persist today, but mankind has scaled old ones and added new ones. Invention, technology, economics, and politics have nuanced and scaled our concept of evil. 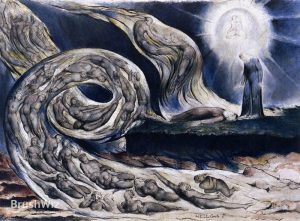 A novella by Bill Schubart 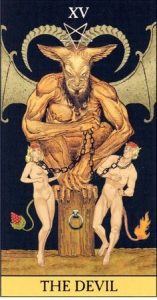 Canto I:     The Boreal Forest

Canto IX:   The Garden of Innocents

“Time to board the ferry, Charon’s here in all his or her glory. I’ve never known which — a hermaphrodite, I’m told.”

Opening my eyes, I see no boatman, only a floating wooden platform with two swaybacked horses tethered at either end of a capstan wrapped a thick rope, both ends of which disappear under the roiling waters. Although I cannot yet see him, my guide points out to me how Charon switches the horses into action with his withe, and how, as they walk slowly around the circumference of their tether, the rope is gathered on one side and paid out on the other, drawing the ferry to the far shore.

Someone of nondescript sex steps from the far side of the ferry into view. I gasp audibly as my guide smiles.

“No need to greet Charon — her tongue is cleft and she can’t speak — nor to be afraid of him. He’s not as horrible as she appears. She confines herself to navigating the condemned across the river to the River Acheron that no longer exists — an arroyo now, desiccated by your ignorance, greed, and the relentless pollution that’s overheated our earthly paradise. You’ve so damaged my beloved home in the intervening years since I walked its majestic forests and fields.”

I’m transfixed by Charon, unaware of my rude stare. She — or he — seems not to notice me but goes about the business of guiding the ferry to the shoreline. She dangles her long withe in front of one of the horses and it stops, causing the other to stop as well. She then tosses a rope to my guide, who pulls the ferry up snug against the river’s bank so we might board.

I’m still staring at Charon, whose fulsome breasts, blood-red aureoles, and alert nipples hang free above his codpiece-covered groin. He has the torso and musculature of a man, and a thick pelt of simian hair covers his bare chest, arms and legs. More perplexing is the faintly seductive glance as she acknowledges her two passengers. Her distinctive face of indeterminate sex seems unravaged by the withering effects of ancient age, her faint smile rendered wry by the slight distortion of her mouth, no doubt from the cleft in her tongue. She says nothing but extends a hand to my guide to help him board her ferry, and then to me. As a young person I was taught to be polite, an attribute that has served me well all my life, but now I toss my pack up on the deck and clamber aboard the ferry on my own, ignoring the calloused, hairy hand Charon extends to me.

As my guide and I settle ourselves on the planks, Charon reverses the two sad rocinantes in their traces so they might walk clockwise around the capstan and switch the ferry’s direction to return to the far side. A touch of his withe on the flank of one of the horses begins the slow rotation again, and the capstan winds the dripping rope around itself from the river side and plays it out the shore side, as the ferry begins its slow traverse. The steaming water wrung from the thick rope runs across the deck in a rivulet that touches my hand, and I’m surprised by how hot the water is, even though I was warned. Soon we’re surrounded by a cold mist and can see neither shore.

From Canto III,  The Correctional Facility:

We enter the hallway, leaving behind the cloud-filtered daylight, now replaced with a cold, bluish-white light infused from an invisible source in the ceiling. I look for anything indicating we’re in a prison.

“Where are the guards?” I ask.

“No need for any. Where’s anyone going to go except inside this building? It extends forever. There’s no outside. Nature’s gone – the endgame of man’s relentless destruction. There is no landscape, no wilderness like the one that fed and sheltered us on our journey here. The tenants in here are deprived of all distractions from their work of atonement, nor can they retrace their steps on the journey from Earth to this place without first purging all memory in Lethe’s spring. Even if one could find his or her way back to the river, Charon doesn’t ferry souls in that direction.

“Unlike in Dante’s time, this is not a place of physical pain. The 108 billion tortured souls who’ve passed through here in the last 50,000 years can’t imagine escape. It’s a correctional facility, and they have work to do and an eternity to do it in should they need it.

“Souls in here reside in groups according to their earthly sins. They’re ephemera – souls with bodies – but their bodies have no substance. Freed finally from the physical pain of living and dying, their only pastime is walking conversation. You’ll see no places to sit or lie down. They need no rest or sleep. There’s no cafeteria, no infirmary, no sanitary facilities. There’s no need to attend to the body, only to cultivate remorse and redemption.

Some spend centuries in self-justification or denial… a defensive response to the pain of guilt. Their redemptive path becomes clear as they begin to understand and acknowledge their sins, their guilt, and learn to empathize with their absent victims. Their infinite conversations with their peer sinners in time lead them to understanding and ultimately to self-forgiveness. I’ve been here several times myself since I left my beloved Earth. I can come and go as I wish now that I’ve atoned for my own sins,” my guide says with a wink.

“But I never drank of Lethe’s waters. So my past still lives in me, as do the many words I scribbled into notebooks, now in the hands of libraries and scholars. I mostly find the Underworld’s denizens thoughtful, if sad, beings.”

“Is there a heaven? Do people ever go to heaven?”

“Heaven is a construct of religionists, as is purgatory – both man-made inventions. Can you imagine anything more punishing than an eternity in the company of ‘Godly people,’ a benevolent, all-powerful being, and a choir of seraphim strumming harps?

“The souls in here are working hard to return to Earth. I only pray your generation leaves something to return to. Will you poison yourselves before you destroy your earthly home?”

My guide’s question reverberates in me, the same question that emerged from my research that sent me into such despair.

“Can you imagine a more sacred cathedral than the Northeastern boreal forest, the Midwest great plain and the Southwest desert we traversed coming to this desolate place?

“Although the River Lethe is arid now, the spring from which it used to flow still bubbles up. Satisfying what may be centuries of thirst, all returning sinners stop to drink of its waters and so lose all memory of their time in here. But they retain the lessons of their hard work, becoming better people.

I stare aghast as the endless parade of maimed souls circulates, some crawling, some on crutches, some carried by others, but no one stopping to rest. I see a suicide still wearing the noose and rope from which he was cut down, another with bullet wounds in his skull, yet another whose severed body parts he carries with him under his one arm, another bent over in pain from the bottle of pills he used to kill his wife who hangs limp from his shoulders. The whispered conversations continue. I see a man desperately trying to breathe life into the wife he beat to death in a fit of imagined jealousy as he alternately cries and begs her to come back. I hear afar a mass chorus of ragged shtetl Jews, Poles, and Romany of all ages coming slowly into view as they shuffle together, singing hoarsely Schiller’s Ode to Joy movement from Beethoven’s Ninth symphony, the unliberated revenants of Nazi deathcamps.

I turn away in horror.

Further on a hill farmer slakes the burning thirst of a coal mining executive with black water from a canteen. Napalmed peasants, their skin blistered and rife with boils, converse with helmeted pilots sipping from thermoses. A blind Indian woman, her face distorted by an acid attack for marrying beneath her caste yells furiously at her brother and flails blindly at him. He seems not to notice as her fists flit about his face. A backroom abortionist whose coat-hanger surgeries destroyed the reproductive anatomy of countless women drags a mound of fetuses on a crudely fashioned travois to which he is harnessed. I see suicides trying to hold in between their fingers the organs spilling from self-inflicted wounds. Again, I turn my head away in horror.

I feel my guide prodding me. He indicates we’re leaving. I smell smoke but cannot see the far shore through the mist rising from the river. I notice the silhouettes of condors gyring in the mist above and am again grateful to see living things.

Charon takes no notice of us as she leads the horses onto the ferry from the shore and tethers them again to the capstan that gathers and feeds out the rope on which we cross. While Charon urges on the nags with his withe, we climb aboard the ferry just as it pulls off the shore, dips, and lunges into the turbid current, crossing slowly to the far shore.

With my renewed sense of elapsed time I guess the crossing takes some twenty minutes. On the far shore I see three dozen newly dead souls awaiting the ferry. When the raft is secured on land, my guide and I disembark, still unnoticed by Charon, at whom I take one last fearful look. I jump down onto the shore as we’re passed by an array of trepid souls who seem not to notice us either – many still in their funeral garments and grave clothes, which seem so out of place here, Sunday-best suits, formal dresses, others wrapped in long swaths of linen. A young girl no older than seven walks by in her first communion dress. She has no one to cling to and looks askance at her fellow passengers. Charon offers his hand as the child struggles to follow her fellow travelers onto the ferry. Behind her shuffles an elderly Hassidim clutching a small black book. A decrepit man wearing only a loin cloth and carrying a bow looks as if he just left Borneo or some remote Pacific island. He is followed by a dark-suited executive perplexed by his unfamiliar companions and seemingly unaware of his own demise. A black girl whose chest and backpack are riddled with bullet holes looks askance at the company she is crossing with. I’m struck by the mix of people and faces. With the exception of the terrified young girls, they seem hardly to notice one another and take no comfort in their company.

When the ferry is full, Charon reverses his horses, begins another crossing to the Underworld, and we’re left alone on the far shore – me to expect that someday I, too, will make the one-way crossing again, but this time never to return. Noticing my guide has already left, I avert my gaze and quicken my pace to catch up.