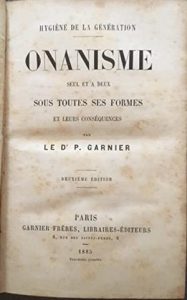 “Bless me, Father, for I have sinned. It’s been one week since my last confession and I accuse myself of having abused myself two times. For these and all the sins I cannot remember, I ask God’s pardon and your absolution, Father.”

Leaving the confessional with my absolution and penance of ten Hail Marys, I’d rush to the sacristy, while reciting Hail Marys to myself, and don my surplice and cassock to serve Sunday Mass.

For most of us who were altar boys 9 to 14 years old, this litany played itself out weekly, as one could never know when Eros might attack while trying to fall asleep at night.

We’d learned from the nuns who came down every Saturday from Quebec to teach us catechism the terrors of “self-abuse” – how our sinful practice was evident to those around us, and that dying with such a mortal sin on one’s soul meant an eternity of hellfire and damnation.

As altar boys, we had to plan confessions carefully to receive absolution prior to serving Mass, as during Mass, we could not receive communion with a mortal sin on our soul, and an altar boy not receiving communion was an advertisement to the faithful that he had sinned. (Female altar servers had yet to be invented.)

Fast forward 65 years and this lapsed Catholic is going in for his annual physical with his revered primary-care doctor. She, too, was raised a Catholic and may or may not be observant. I didn’t ask.

She asked me if I had any particular complaints or concerns. I answered that I considered myself lucky for a 76-year-old, in that my only real complaint –  shared by most men my age – was the need to get up multiple times in the middle of the night to pee.

“An enlarged prostate,” she observed while typing into my electronic medical record (EMR).

“Very common. I can give you something for it if you wish, but I know you don’t like to take medications that are not life-extending.”

I nodded and declined a prescription for a drug named “Flomax” – “oddly,” as the name conjures up incontinence rather than uninterrupted sleep.

My doctor continued keying information into my EMR while I sat waiting to be dismissed.

Not sure I’d heard her right, I said, “I beg your pardon.”

She repeated the question.

I was stunned into silence. No one had ever asked me that before, not even my Father Confessor.

Pitched back into the dark confessional of my youth, I stuttered, “Well, occasionally,” trying to be noncommittal.

“Double it,” she said clearly. “That’s my prescription.”

I sat there in silence.

“I’m serious,” she said, turning to me and smiling. “I was a Catholic, too. I know what you’re thinking.”

A broad smile illuminated her beautiful face and we both broke out in laughter, struggling to control ourselves.

“You just consigned me to an eternity in hell,” I laughed.

“Believe it if you must,” she answered.

“Do you want a written prescription?”

I declined. She gave me a big hug and I left, still trying to stop laughing.

The wisdom of her medical advice made sense to me later, even as I still struggle to reconcile it with my Catholic upbringing, long ago as it may be.