A friend from California recently asked me about two televised electoral charts she’d seen showing Vermont’s electoral voting response. She pointed out that the presidential chart was blue, mottled here and there with red specks, while the gubernatorial chart was the inverse, largely red with small blue islands clustered around the larger towns.

I acknowledged the irony of Vermont voting solidly Democratic while also voting overwhelmingly for our Republican Governor Phil Scott, who himself voted for the Biden-Harris ticket.

“You need to understand Vermont,” I replied, trying to summon a credible explanation, adding, “We vote for people not parties.”

“So, you’re different from the rest of the nation?” she challenged.

Then I feigned an upcoming Zoom meeting and promised to call her back.

Although I’ve lived in Vermont since 1947, my political sensibilities weren’t really honed until the late 1960s and the election of Democrat Phil Hoff, which ended a century of Republican Governors in Vermont. The first Governor I got to work with was in fact a Republican, Deane Davis, whom I got to know when I served as Chair of the Vermont Council on the Arts in the early ‘70s.

“Republican” in those days was a term universally deserving of respect. It denoted someone who believed in a social safety net, caring for those who could not care for themselves and in protecting the environment against predatory development.  Act 250 was the most progressive environmental legislation in the country, passed in 1970 during Republican Deane Davis’ administration and with the support of a Republican legislature.

Vermont Republicans of that time believed in the balance expressed in Vermont’s motto, “Freedom and Unity,” paying equal attention to personal freedom and the responsibilities it demands and the well-being of family and community, on which everyone’s well-being depends. 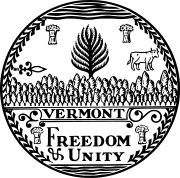 These days when I’m asked to name Vermont’s most effective governors, I see a look of confusion when I mention the mix of Phil Hoff, Dick Snelling, Deane Davis, Madeleine Kunin, and Phil Scott. Perhaps that’s because I’m viewed as liberal and my list does not conform to party affiliation. My criteria – right or wrong – are principled and competent leadership rather than political ideology, humility, and the ability to delegate.

No leader is perfect, but good ones know their own limitations. They know they don’t have all the answers and enlist the best managers they can find, regardless of their politics. They also know how to derive consensus and act decisively on it.

A good example is Governor Scott’s leadership on the Covid-19 crisis. Among the state governors, Scott is an exemplar, both in his humility and in his leadership. But in each case leadership depends on a responsible citizenry. During the pandemic most (but not all) Vermonters have been willing to follow scientifically based preventive measures.

The steeper challenge is managing the present while planning for an uncertain future. Governor Scott has proven to be an excellent crisis manager. His skills preemptively managing a rapidly evolving future, however, are yet to be proven.

My own family was relatively liberal. My paternal grandfather worked for the FDR administration. My youthful naivete and two years at UVM pushed me left. Then in 1963, I saw the rapid-fire assassinations of President Kennedy, presidential candidate Bobby Kennedy, and civil rights hero Martin Luther King. In an escape fantasy, I left for Woodstock with friends, only to read a year later about the Ohio National Guard firing 67 rounds in 13 seconds at demonstrating students at Kent State, killing four and wounding nine unarmed students. That radicalized me, like many others my age.

But my introduction to political discourse took place in the basement of Gillen’s Department Store on Main Street in my hometown of Morrisville where Fred Westphal held court, selling shoes and classical LPs.  I was in junior high and loved classical music. Fred, who was a family friend, installed a “hifi” in an unused closet in our living room. When I was alone, I would turn it up and listen to a recording I’d saved up to buy, while standing on a chair and conducting an imaginary orchestra. And then I’d return to Gillen’s basement to hear more music, delivered with a conservative diatribe.

Fred’s hero was Cecil Rhodes, once Prime Minister of the Cape Colony in Africa and the man after whom the Rhodes Scholarships were named until recently. I teased Fred about his racist and ultraconservative hero, asking him why he didn’t just move to Rhodesia. His answer was “If I could figure out how to bring my Mercedes, I would.” In an 1877 letter, Rhodes wrote that “the Anglo-Saxon race was the first race in the world.” My friendship with later-to-become Vermont Senator Fred Westphal was a profound lesson in how to talk and be friends with someone whose ideas you revile, a social discipline we would do well to pursue  today.

Since then, I’ve worked with governors and legislators of both parties on a variety of cultural, political, civic, and economic issues and still do today.

In my time participating in and observing the Vermont political scene, I’ve come to understand that the politics of Vermont don’t necessarily resemble what they are in the rest of the country. By and large, we understand that progress is incremental and demands compromise, which we still have the capacity to forge, although it will require lots more as we confront the daunting issues we face such as hunger, housing, education, and healthcare.

Many commentators of both stripes would have us believe that we’re seeing the onset of a civil war nationally. In reality, there remains much that binds us, especially within the tightly woven social fabric of our smaller communities as well as the neighborhoods in our cities.

What connects us is not the stuff of headlines. Most Vermonters remain unimpressed with ideological posturing; they want to see openness, constructive leadership, and change, as we have seen in our past.

Vermont is not drowning in its own politics. We still judge political aspirants by their character, accomplishments, and prospects. Like many Vermonters, I’ve voted for Republicans, Democrats, Progressives, and independents over the years.

I’m heartened that most of us still believe in the potential for good government to materially improve our lives. We may disagree on the means but not on the goal.

Who’d ever believe it?

Sen. Fred Westphal of Lamoille County is by his own admission the most conservative of all candidates seeking the U.S. House Seat vacated by Sen. Robert Stafford.

Westphal opposes welfare, thinks Day Care Centers are a lot of foolishness, views revenue sharing as a “cruel hoax,’ hates Communist China and thinks it’s insane for the President to go there. He likes the seniority system in Congress, “the more senior the better,” and thinks the country might be better off if Congressmen spent less rather than more time in Washington.

On this basis, wouldn’t you be able to predict his reaction to “youth culture,” more familiarly known as “those darn hippies?”

But Westphal isn’t always predictable and he said in an interview in Vermont Sunday News last week that he occasionally picks up “some of these hippie types” in his travels around Vermont.

“I’m absolutely surprised at how much we have in common. I’m surprised that they view most of the problems the same as I do. I know a lot of them surprised people with my bumper sticker on their cars, and some of them volunteered to help in my campaign,” said Westphal.

And he added, “I disagree with those who go for the drug culture, a small percentage, but there’s a lot of subcultures in the hippie movement, so that when you get acquainted with them, you find they’re pretty puritanical; maybe that’s why we’re in so much agreement.”

Now that’s what we call bridging the generation gap, Or, between people like Westphal at least willing to listen, and his young audiences willing to discuss their ideas honestly, is there really so much of a gap after all?