We have much to learn from our neighbors, the Abenaki People 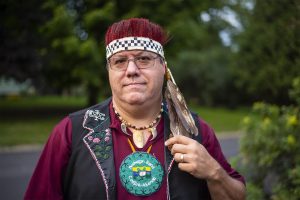 Chief Don Stevens of the Nulhegan band of the Abenaki nation at home in Shelburne on Tuesday, September 15, 2020. Photo by Glenn Russell/VTDigger

Our deeply mismanaged stewardship of Planet Earth confronts us daily with apocalyptic images of warming climate impacts from around the world.

Melting glaciers in the Arctic, on which I have walked; raging forest fires, the smoke of which I have inhaled 3000 miles away; rising sea levels, which I have seen firsthand, and blistering heat waves, which I have felt in my native Vermont, are all unmistakable symptoms of the carelessness of some of us.

According to the Brookings Institution, some 70M displaced people are in migration because of local climate impacts. By 2050, that number is projected to double. Drought, declining aquifers and fire are putting agriculture in the far West at grave risk, driving eastward migration by those who can afford it.

As one deeply involved in the arts over my many years, I participated in a two-day conference on the role of the arts and humanities in social justice. It began with a ceremonial acknowledgement of the land on which we live, presented by Vera Longtoe Sheehan of the Abenaki Artists Association. She began: “The land we live on is the traditional and unceded or un-surrendered territory of the Abenaki people who have had a continual and enduring presence here in N’Dakinna (Abenaki for “our homeland”) since time immemorial. That presence continues to this day. My people knew this land as Wôbanakik (Abenaki for Dawnland) and we are the Wôbanaki people. In Abenaki, Waban is the white flickering light in the sky and Aki is our word for land or the earth, so we are the People of the Dawnland.”

Moved by her words, I was determined to learn more about Native Peoples’ long stewardship of this land before it was overrun by Europeans. (Educators can also learn more and earn a certificate or credit from Castleton University: Presenting Abenaki Culture in the Classroom.)

Over my years, I’ve learned how self-referential and wrong the historical mythology I was taught about the “discovery” of America was. The racial arrogance of claiming “discovery” when European explorers encountered native peoples everywhere they landed is stunning. The Americas appeared on no primitive maps and the assumption was the “explorers” had landed in India – hence “Indians.”

Today, many are loath to discuss our deeply racist origins, both as it relates to our “discovery of America,” the genocide of native peoples, and our kidnapping of human beings indigenous to Africa to be enslaved and sold as “free” labor. This, even though an honest discussion of our real history would help heal our divided community.

Like it or not, we are a nation comprised of indigenous peoples, newcomers from Europe, enslaved people (indigenous to Africa), economic migrants from around the world and, today, migrants seeking relief from political oppression and violence and the impacts of global warming. Yet still, we have no coherent immigration policy other than fences, armed guards, and inhuman detention centers.

Here in Vermont, we live among the Abenaki, who inhabited and cared for these lands millennia before we arrived: the Elnu Abenaki, the Nulhegan Band of the Coosuk Abenaki Nation, the Koasek Traditional Band of the Sovereign Abenaki Nations, and the Missisquoi, St. Francis-Sokoki Band.

The Bering land bridge from Asia to what we now call Alaska is assumed to be humanity’s doorway into the new world some 20,000 years ago. Those who came are the indigenous people native to the Americas long before Columbus arrived.

After centuries of genocidal slaughter, ethnocidal attacks on their culture (traditions, languages, and renaming their landscapes), and, in the last century, eugenic sterilization, the effort to wipe out native peoples and their culture is subsiding and we’re now coming to understand our loss.

It’s worth quoting the mission of the Nulhegan Band of the Abenaki peoples:

The mission of the Nulhegan Band of the Coosuk Abenaki Nation is to strengthen our government; to build our community, and ensure sustainability; to protect our customs and traditions; and to continue to promote our culture and celebrate our heritage while sharing it with those around us. The Nulhegan Abenaki tribe is nestled among the lakes, rivers, and forests of N’dakinna’s northern range and headquartered in the Northeast Kingdom at Barton, VT. We are one of the largest Abenaki Tribes still in existence today. As a nomadic and place-based people, we live and travel throughout our greater Western Abenaki territories as our ancestors did. These traditional homelands we call N’dakinna include Vermont, New Hampshire, and parts of Canada, Maine, and Massachusetts. Our connection to this land cannot be described in any language. It is our birthright and obligation to advocate for our citizens and lands throughout our ancestral territories. We continue to respect and steward N’dakinna so that its uniqueness and beauty will be protected for the generations to come.

How much can we learn from these wise and welcoming people living among us? Learning comes with recognition, which is only a beginning.

Last year, Middlebury College, known internationally for their intensive immersion approach to the teaching of language and culture, began teaching Abenaki as a pilot program. Abenaki is an endangered Eastern Algonquian language and one of the three Wabanaki languages of New England and Quebec still spoken throughout a wide area ranging from Lake Champlain to the west and Maine to the east.

In 2018, Sterling College partnered with the Nulhegan Band and the Seeds of Renewal Project to save rare seeds of traditional Abenaki fruits and vegetables and to cultivate and harvest them to feed the Abenaki people and others.

In Shoreham, the Abenaki are managing a bison herd. This near-extinct American animal has long been a symbol of strength and a source of animal protein for indigenous peoples in the Plains and the West. They will be used for grazing and to propagate and sustainably feed the Abenaki people as they did before white settlers hunted out the American bison for fun and profit. In 1869, one hunter, Orlando Brown, brought down nearly 6,000 buffalo by himself, losing his hearing in one ear from the constant firing of his .50 caliber rifle. Slaughter-for-fun continues today as exemplified by the recent wolf-kill in Indiana.

Alnobaiwi, a collaboration between indigenous people, the Ethan Allen Homestead, and the Winooski Valley Park District will host a weekend gathering and Green Corn Ceremony event at Negôni Alnôbaakik, a ceremonial space adjacent to the Homestead Tavern and Alnobaiwi Cultural Center Museum.

The deterioration of our landscape is paramount in the minds of most Vermonters – our waterways, soils, and air. The agricultural runoff from agricultural monocropping and waste accumulation has polluted our major waterway, Lake Champlain, and questions are mounting about Lake Memphremagog.

Here Chief Don Stevens tells us of the significance of water to the Abenaki people.

It’s long past time for us to begin to see ourselves other than by country of origin, skin color, and by supporting that narrow view with self-serving myths of history.

We live among people who have been stewards of our land for millennia. They found a balance between using the land to survive, respecting its flora and fauna, and honoring it, while Europeans first few centuries in this country focused almost entirely on what could be extracted from it for profit. Only now, with the severe climate impacts from this exploitation hitting home are we beginning to understand what the Abenaki have known for years.

It’s a tradition of Vermont communities to see, greet, meet, and learn from our neighbors. This is as true for our Abenaki neighbors as anyone else. We can and must integrate Abenaki values and voices into our economy and institutions of governing and participate in theirs. They have lived here much longer than we have. We have much to learn from them.