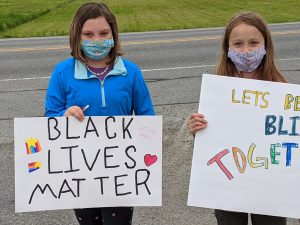 Like many Vermonters, I’ve been watching with pain and empathy the protests unfolding in countless cities and towns across the country. Watching the murder of George Floyd has called on me to explore my own white privilege and intersectionality perspective.

Last week, some 200 Hinesburg young people, families, and other citizens walked  Rte. 116 between Lantman’s Market and NRG Systems in peaceful protest both of the murder of George Floyd and the deep and residual culture of racism in America.

In Vermont, we like to imagine ourselves a welcoming community, and for much of our history we have been and are. But as we congratulate ourselves on our professed belief in racial equality and our historical abolitionist efforts, honesty calls us to remember the dark underbelly of racism and economic privilege that persists even today in Vermont.

My French-Canadian grandmother, Elise Couture – the moral beacon in our family  for 101 years – recalled for us the Klan’s activities in her hometown of Morrisville. “It was so silly, really,” she would chuckle, “those grown men riding around town dressed in sheets. We all knew who they were. Morrisville didn’t have any black people or Jews, so they rode around the homes of Quebecois, Italian, and Irish – most of us, in fact. And when the sheets came off, we all were their customers, employees, and friends … so silly.” In 1916, D.W. Griffith’s silent film Birth of a Nation played in theaters across the country, including Morrisville’s Bijou Theater. The hugely successful film is often credited with the genesis of the Ku Klux Klan.

In 1968, when I was 23, I followed the Irasburg incident. Just three months after Martin Luther King’s assassination, a Glover man, Larry Conley, fired shots into the living room of The Rev. David Lee Johnson, his partner and her daughters. Conley was charged with breach of the peace and was fined $500. But the interracial couple was fined $125 for adultery and they left the state soon after the incident. The story was the basis of  Howard Frank Mosher’s 1989 A Stranger in the Kingdom.

The 1931, Vermont’s “Eugenics Law” targeted “idiots,” “imbeciles,” and “feeble-minded” and “insane” persons, permitting the state to castrate or sterilize people deemed as such. UVM formally apologized for its leadership position in the racist “science” and promotion of eugenics which went well beyond the intellectually challenged. It was also the well-documented subtext for excluding Negroes and other people of color. Vermont’s own Calvin Coolidge embraced the popular science when in 1924 he declared, “America must be kept American. Biological laws show…that Nordics deteriorate when mixed with other races,” and, as President, he supported The Immigration and Restriction Act of 1924. Any of this sound familiar?

Growing up in the fifties and going to Morrisville’s People’s Academy, our spring event was “Kakewalk,” a parody of a racist and humiliating amusement staged by slaves for their owners. The “owners,” king and queen of KakeWalk, sat in large chairs and watched as students dressed in black-face and tuxedoes – their slaves – high-stepped towards them in pairs with their arms pitched up and way back. The grand prize for the highest steppers was a “plantation cake.” As a middle-school student I remember sneaking into the auditorium and watching seniors audition for the spectacle. Hence the name KakeWalk which persisted in Vermont in my childhood and at UVM until 1969.

More recently, Vermonters remember the Kiah Morris case in which Vermont’s lone black female legislator was harassed by a Bennington white supremacist, Max Misch, to the point where, fearing for her safety, she resigned her seat. To date, little that made Misch’s racist intrusion in Morris’s life entirely legal, has changed in Vermont despite outcries.

In a 2017 study of police-stops conducted by UVM Prof. Stephanie Seguino, black drivers were four times more likely than white drivers to be stopped and searched by Vermont police. The study also found that 56 % of black drivers searched were found with contraband, compared to 67 percent of white drivers searched. Progress has been made according to a 2018 study by the Vermont Partnership for Fairness and Diversity. The study, however, unlike Seguino’s more comprehensive earlier one, assessed only Vermont State Police stops and not those by all our many local departments, sheriffs, and deputies.

In 2018, the Legislature passed Act 9 establishing a Racial Equity Advisory Panel “to advise the Governor on strategies for remediating systemic racial disparities in statewide systems of government and report progress to the legislature.”

Admirably, Vermont businesses, organizations, and agencies have been, for the last few years, issuing and publishing statements on “Inclusion and Diversity.” Governing boards are scrambling to include more diverse trustees.

The hard questions Vermonters will have to ask themselves and their leaders now are:

All progress is incremental. But between the racial implications of the pandemic and George Floyd’s televised death at the hands of a racist police team, the power of the present is directly in front of us. Let’s hope it will propel us and our leaders into turning the corner on racial equality and creating a level economic playing field for the benefit of all Vermonters.